My mission in the Holy Land was going to start in September, but, life is amazing, so I ended up in Jerusalem in July for a short week!


It was Sunday, July 9th in the afternoon before going to mass and I was cleaning up my emails and organizing my contacts when I found an email from Bishop William Shomali of the Latin Patriarchate in Jordan replying to an email thread where I was copied, last year… when he was Monsignor of the Latin Patriarchate of Jerusalem. Last year, his name wasn’t familiar to me, but this year, I’ve seen him in almost every important celebration in Jordan and have met him briefly once, so I was intrigued and checked what was the email about. It was about his involvement with the Interfaith Conference of Forgiveness to be held in Jerusalem on July 12 and 13 of 2017!

I was in the email thread because on a phone conversation I had last year with Father Kelly, the Vice Chargé of the Pontifical Institute Notre Dame Center in Jerusalem, he had suggested me to participate in the organization and to attend the conference since he knew my profound interest in the resolution of the Israeli-Palestinian conflict, and, according to him, education on forgiveness in such a deep conflict was necessary to heal so many decades of grievances on both sides. At that time, I was busy with lots of projects and happenings at work and although I got acquainted with the details of the conference, I couldn’t do much. Also, I wasn’t sure I could take time off from work to attend.

But, on that Sunday in Jordan, after seeing the Bishop’s email, I contacted Fr. Kelly and Dr. Enright, the founder of the International Forgiveness Institute in Wisconsin, and asked them if they needed volunteers for the conference, to which they said yes, very enthusiastically. After the evening mass, during a farewell reception to the Vice Nunzio of Jordan at the Italian Embassy, guess who was there…? Bishop Shomali!

When I mentioned him about the story of the email, he said “Oh, you should go, I’ll be presenting on a topic. Ask the sisters to host you at their house in Jerusalem, it's around the corner from Notre Dame!” I asked the Superior of the house where I live if I could take that week off to go to the conference, and she said I had to text the Director of the Middle East Province, who was in Rome, for authorization. And the Director said she had no objection if there was a room available for me at their house in Jerusalem. Next morning, while I was attending a conference about refugees in Jordan, I got the confirmation for the room, and in the afternoon, I was traveling to Jerusalem!

The Jerusalem Conference on Forgiveness was held at the Pontifical Institute of Notre Dame of Jerusalem Center for two days, on Wednesday, July 12th, and Thursday, July 13th, and on Tuesday, July 11th I spent almost my entire day at Notre Dame helping to finalize the press release, getting the final design for the volunteers’ t-shirts and getting them ordered, and receiving the instructions for our volunteering tasks during the days of the conference. 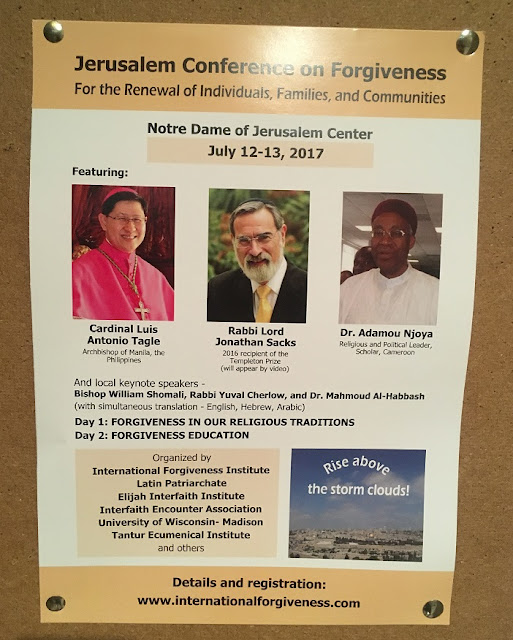 The conference discussed the meaning of forgiveness by well-known representatives of the three main Abrahamic religions – Judaism, Christianity, and Islam-, how the education on forgiveness had a positive impact in schools and in other institutions around the world, and how it could be implemented not only in schools but at home. About 300 participants attended both days, including Israelis, Palestinians, and members of the international community.

Peta Pellah of the Elijah Interfaith Institute was the Master of Ceremonies and she did a wonderful job through the conference! Here she is moderating a table with Israeli and Palestinian women working together in Women Wage Peace.  "In all these years, men couldn't bring peace to Israel and Palestine, so now is our turn".

With Edel, from Ireland, my "volunteer buddy". By coincidence, she was also staying at the Salesians Pilgrimage House and our rooms were across each other! Edel's role was to escort the VIPs and mine was to be in charge of the HVS presentations for the speakers... first time ever doing it!


At the end of Day 1 of the conference, with Fr. Kelly, who so generously hosted us for meals during the volunteering days. I was introduced to Fr. Kelly in 2013 by email and it was great to finally meet him in person! He is very smart, profound in his reflections, and has an extraordinary sense of humor! He is from Ireland as well as Edel, and, once again, I can confirm that Irish people are so wonderful and fun to be around!

Volunteering at such an important conference, and with such a responsible role as to handle the technical aspect of the presentations for over 300 people helped me get out of my comfort zone doing something I am not used to doing. It was also a great opportunity to listen to religious leaders of the main three Abrahamic religions agreeing that God is a God of mercy and forgiveness. And, what I took from the leaders of my religion, Christians, is that God always forgives us, it is us who are not ready to be forgiven by Him, at times.

Jerusalem, unexpectedly, also put me in touch with the Filipino community! On Tuesday, July 11th, I decided to go to 6:30 pm mass at Notre Dame thinking Fr. Kelly was going to be the celebrant, but, instead, the mass was celebrated at the auditorium by Cardinal Tagle...!

About 450 people attended to his mass, the majority Filipinos living in Israel. Filipinos, mostly women, usually emigrate to other countries to work as caregivers, leaving their kids behind to be raised by their fathers and grandparents, while the mothers take care of other women's children. Cardinal Tagle delivered a very warm message to all these women. 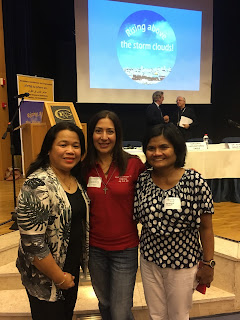 These Filipino women had attended the Cardinal's mass the day before, and they also joined us on Day 1 of the conference. They were sitting behind me and I assisted them through the conference and took pictures of them with Cardinal Tagle. One of them has been working in Israel for 23 years! They were very nice and asked me to take a picture with them :) 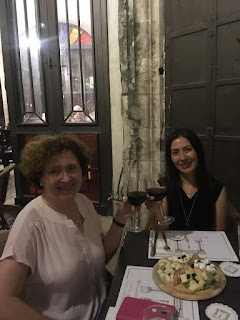 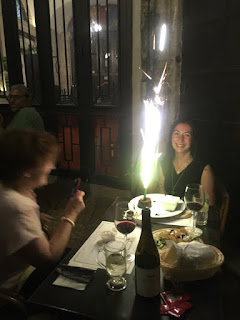 Yes! The last day of the conference, July 13th was my birthday! Edel gave me a birthday present in the morning, and at night she invited me for dinner! It was great to go for a walk to the Old City of Jerusalem after being 3 full days at Notre Dame Center. Edel was such a great company during my stay in Jerusalem and is another angel in my life :)

I wouldn't have liked to end this post on a sad note after participating in such a wonderful conference on forgiveness, but, the day after the conference, on Friday, July 14th, it was the attack on Temple Mount where 3 Palestinians killed 2 Israeli soldiers, and the Palestinians were eventually found and killed. The sisters' house is few blocks away from the Old City and we could hear the helicopters and police after mass was over by 7:30 am and they told us to avoid the Old City area... and Edel and I had planned a walk there and to the Mount of Olives in the morning. On Saturday morning, I was heading back to Jordan. 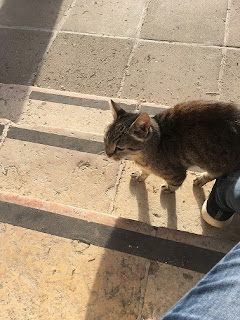 The house cat, my friend - he used to wait for me after breakfast and talked to me and followed me until I stopped to pet him!

I'll be leaving to my mission in Nazareth soon and I'm not sure what my next post will be about, but I still have many more experiences to share from my mission in Jordan, so stay tuned!

I’m only $695 away from my $5,500 goal to sustain myself for 1 year in the Middle East. If you haven’t contributed yet, please go to my fundraising page by clicking on the link below.

*You can also contribute via Venmo, Paypal, or directly to my Chase account through Zelle. My email address is natalialiviero@hotmail.com

Your contribution of $25 or more will have a huge impact in my mission and will make you a part of this dream that has been coming through so amazingly!
https://www.gofundme.com/a-dream-of-peace-in-the-middle-east

And to those who contributed, THANK YOU for choosing to be part of my mission!

May God bring peace to the Middle East and grant us peace in our hearts,
Natalia Liviero, VIDES+USA Missioner